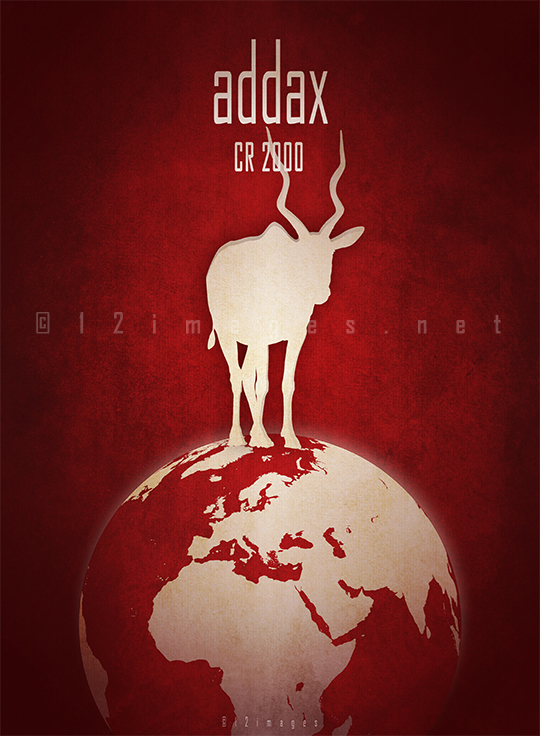 One of the defining movies of my childhood was Jamie Uys’ 1974 nature documentary Animals Are Beautiful People. I remember the opening shots showing the sand dunes and flats of the Namib desert and the narrator’s voice: ‘The oldest and driest desert of the world…. You’d think nobody could make a living here.’ And then the movie shows the incredible animals and plants inhabiting that hostile and seemingly empty environment; and shows the other, ephemeral face of the desert by filming how the Kalahari turns into a meadow for a few weeks after a rain.

The Sahara – largest of all (non-polar) deserts – doesn’t appear in this movie; but the wildlife of the over 10 million km2 area (together with its southern Sahelian fringes) is just as uniquely adapted to the complex mosaic of arid and semi-arid lands of rocky plateaus, sandy dunes, basins, depressions, wadi systems, gravelly plans, arid grasslands and mountain ranges. Thanks to the extreme conditions these habitats have remained largely undisturbed by humans, and the main threat to the survival of most of the wildlife is the recent severe drought. For the last few hundred thousand years, the climate and the vegetation of the Sahara has alternated between hot desert and savanna grassland – this phenomenon is attributed to a 41 000 year cycle caused by the 2.5° precession of the Earth’s axis. Although currently we are in the dry period – with the next wet period expected in 15 000 years – the long droughts of the 1960-80s are considered rather extreme and induced a catastrophic expansion of desertification over the entire region with direct and collateral consequences affecting both the flora and the fauna of the desert. 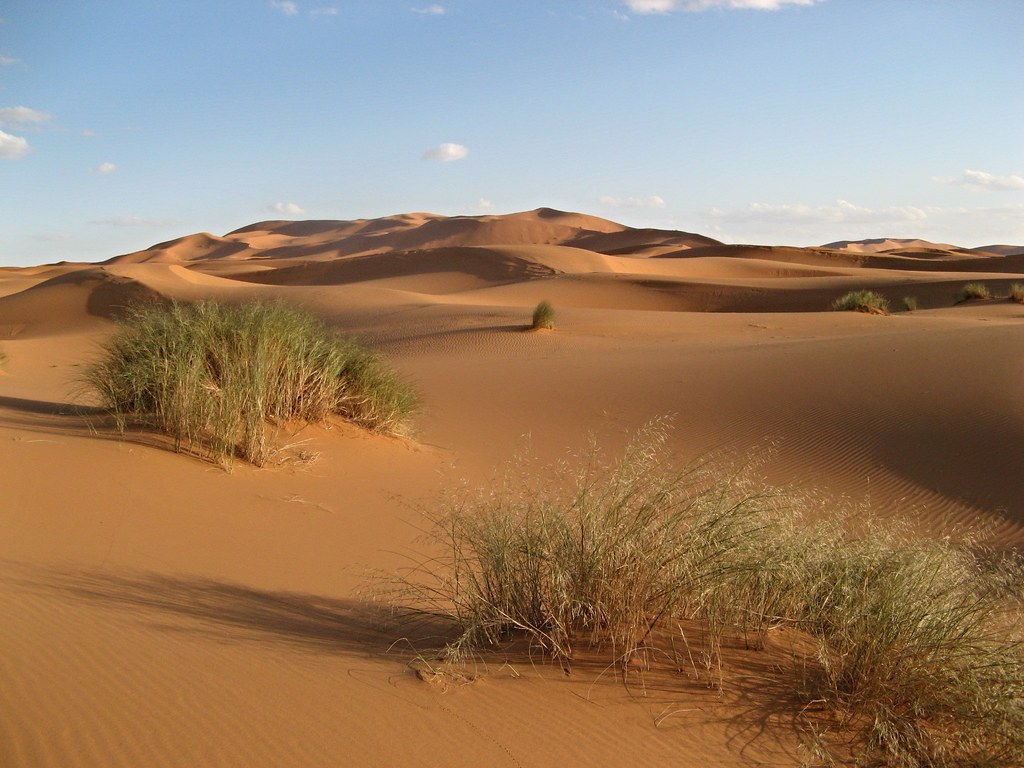 Unfortunately there is one group of Saharan animals threatened not only by the extreme drought: large mammal species of the desert have been heavily overhunted in the last century with modern arms. The populations of these species are rapidly declining; many of them are facing the imminent threat of extinction. One of the critically endangered species is the Addax – or white antelope – with fewer than 100 individuals living in the wild.

Range: The addax was historically widespread throughout large areas of the Sahara and its bordering Sahelian grasslands, but over the past century and particularly over the last few decades the range of the species has been drastically decreasing. Once found in all countries sharing the Sahara Desert, today there’s only one remaining addax population in the wild in the Termit/Tin Toumma region – a narrow band of desert between eastern Niger and the Djourab sand sea in western Chad -; with some occasional vagrants in southern Algeria and a possible small group in central Mauritania, based on unconfirmed reports.
A few hundred addaxes have been reintroduced into fenced enclosures in their former range and habitat in Tunisia and Morocco, with slowly increasing numbers. The captive population is estimated to be around 6000 individuals globally (in Europe, North-America, Japan, Australia and the Middle East); partly in managed breeding programs of zoos, partly in private collections and on ranches in the USA where they are kept and bred for hunting.

Habitat: Addaxes are desert-dwellers, the species has been recorded in all major habitat types of the Sahara except the mountainous areas; they inhabit even the most arid territories with extreme temperatures and less than 100 mm annual rainfall. They have a preference for firmer sand sheets and flatter areas between sandy dune fields where they can graze on ephemeral annual pastures and more permanent perennial vegetation.
The addax is a nomadic species with movements following the food source available at the moment – they penetrate deep into the central arid Sahara after rainfall makes the desert bloom and move out of the desert to the bordering Sahel regions during the drought to find shade and grazing. 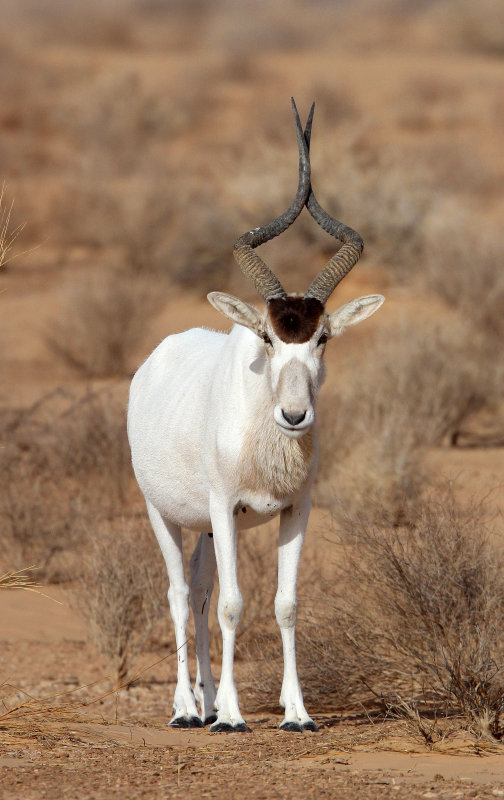 Description: The addax (Addax nasomaculatus) – besides the rhim gazelle, also endangered – is the most desert-adapted African antelope: it has anatomical, physiological and behavioral characteristics allowing the utilization of extremely desolate, inhospitable and arid habitats. The species is also known as screw-horned antelope: its most recognizable feature is the beautiful, long spiral double horn that can reach over one meter in length with one to three twists.
Male addaxes have a shoulder height of about 95-115 cm and a body weight of around 100-125 kg – females are a bit smaller and lighter. They have a stocky build, relatively short and sturdy legs for an antelope, and broad hooves with flat soles and strong dewclaws suitable for traveling efficiently on sandy terrain – they have adapted to endurance of extreme conditions of the desert rather than to speed. The coat of the addax changes seasonally: in the hot summer it is almost white to reflect radiant heat; in winter it turns into smoky grey while the belly, the legs and the hindquarters remain white. They have dark brown hairs between the horns and a conspicuous X shaped white mask over their greyish nose. They have a short, slender tail ending in a tuft of black hair. 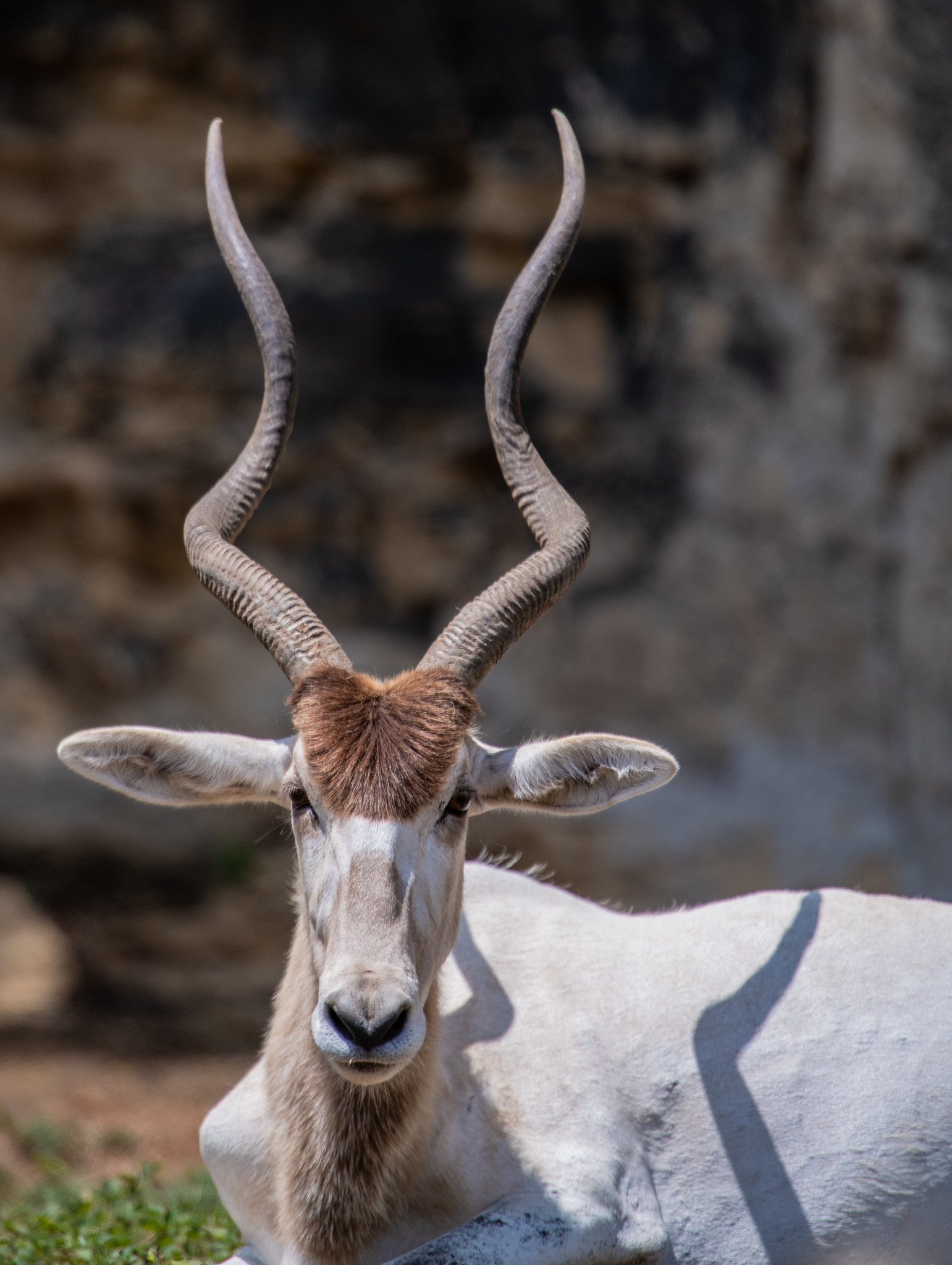 Addaxes are primarily grazers, eating mainly grasses; but they also consume leaves of shrubs, leguminous herbs and bushes, water-storing plants such as melons and tubers, perennials turning green after the rain, and – if there are no grasses available – they browse leaves of small trees like Acacia too. The addax has physiological functions highly adapted to desert life; these antelopes are able to survive without water utilizing only the moisture from their food and the dew that condenses on plants. They conserve the moisture by excreting dry feces and concentrated urine and they are able to tolerate a daily rise of 6 °C in their body temperature before they need to resort to nasal panting to cool down. They feed at night and early morning and spend the day resting in shaded areas and depressions that provide them protection from direct heat of the sun and sandstorms. 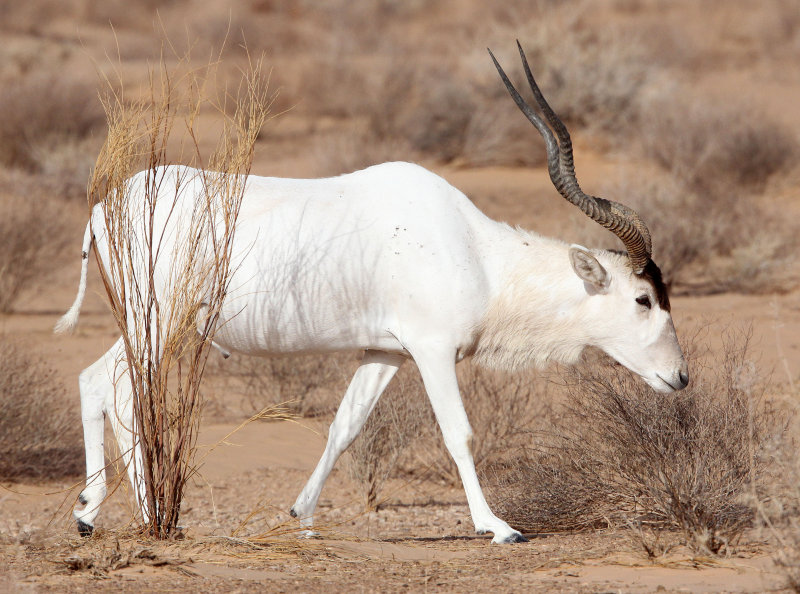 Addaxes are social animals, herds usually contain up to 20 members – both male and female -, with a strong social structure based on age and led by the oldest female. Breeding peaks during winter and early spring, females deliver one calf after a 9 month gestation period. 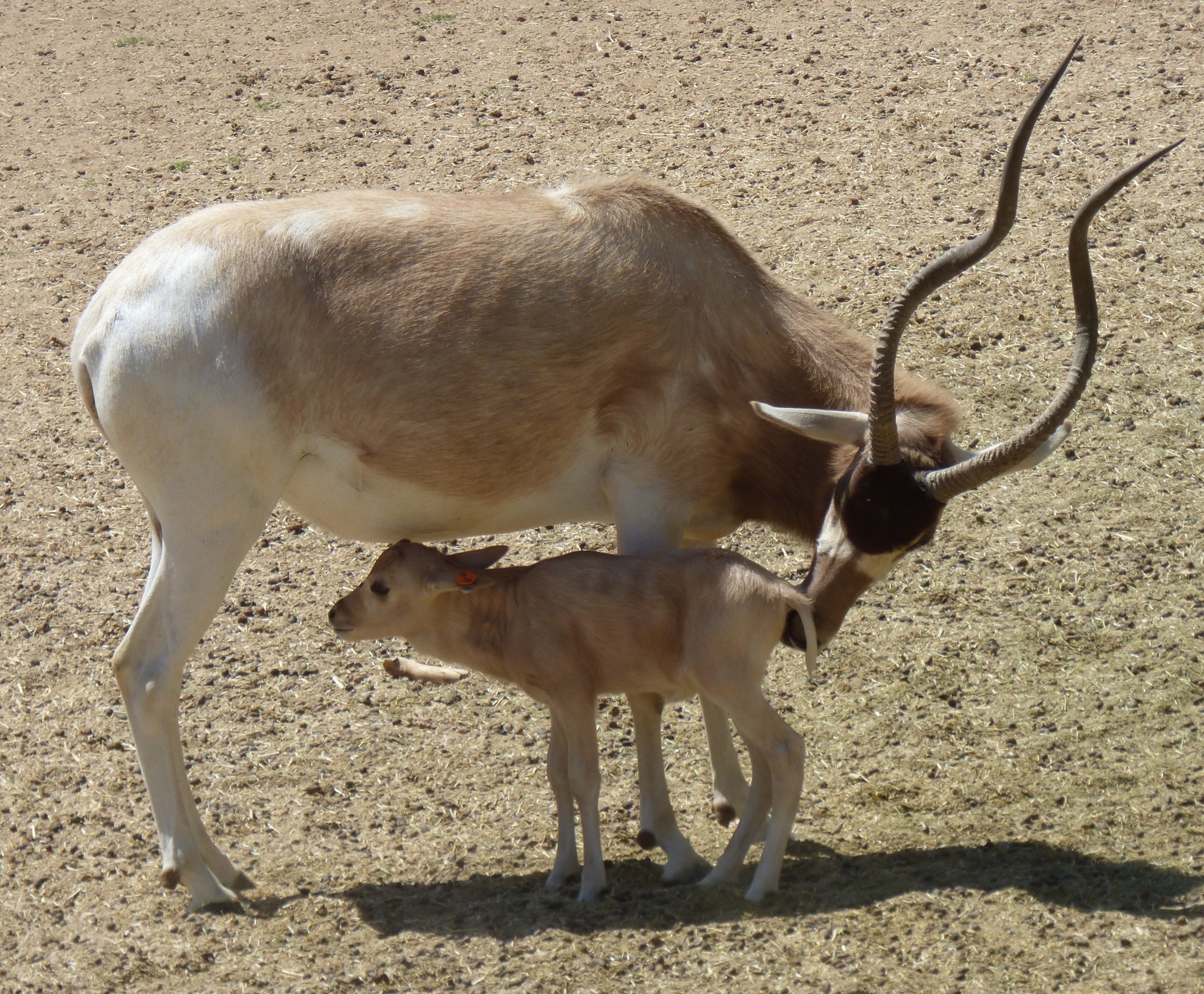 Threats: The addax has been hunted historically with traditional methods for its meet, skin and horns by nomad peoples of the desert and by European trophy hunters; but the rapid decline of the population started at the end of the 1940s with the advent of the lethal combination of modern firearms and off-road vehicles. The extreme drought periods of the second half of the 1900s resulted in general reduction of pasture lands, forcing the addax from the more secure arid area to the Sahelian steppes where it was more exposed to exploitation.

By the beginning of the 21th century the number of addaxes plummeted to near extinction – the wild population was estimated to be around a few hundred individuals. During the last two decades growing regional insecurity, migrants, and the illicit trade of arms and drugs has significantly increased the traffic and illegal hunting in the remote, formerly undisturbed habitats of the addax. Poaching has also increased because of hunting by mining, military and administrative personnel of the Chinese oil industry’s installations in Niger, the last remaining reserve of the addax. 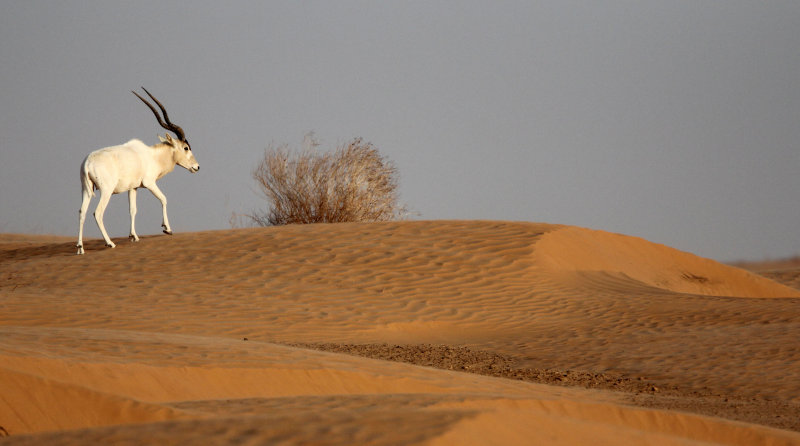 In spring 2016, an extensive aerial and ground survey of the experts of the IUCN and the Sahara Conservation Found had found only three individuals in the Termit/Tin Toumma Reserve of Niger – an area considered as the key habitat of the addax. Fortunately later that year and during 2017 new surveys in Chad and Niger revealed a few small groups – still less than hundred individuals – of addaxes, giving hope that with joint efforts and engagement of the governments and wildlife services of both countries and with the expert help of several conservationist groups an effective action plan can be implemented to save this remaining population.

The addax poster at the top of this post is available in my store on Redbubble, with design variations more suitable for apparel and other products. My whole profit goes to the Sea Shepherd to support their fight to protect our oceans and marine wildlife.