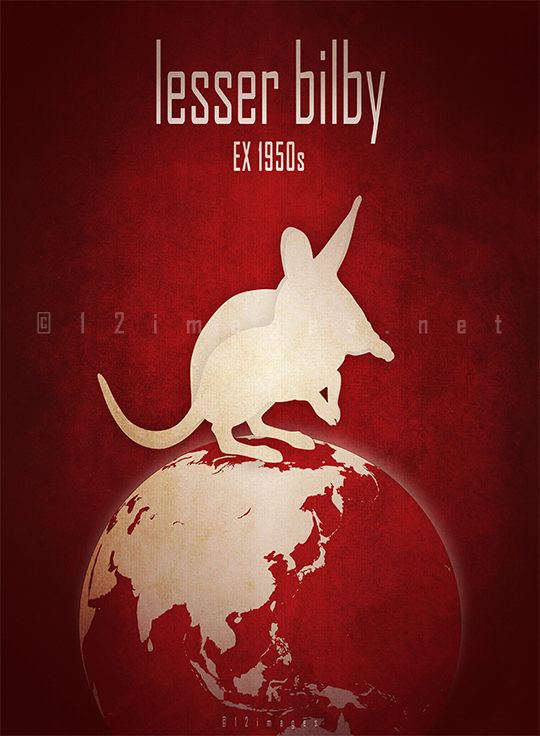 On a personal note…I clearly remember the first time I saw a picture of a bilby. I was just staring at the photo thinking there’s no way this creature is legit: this must be a hoax, a digitally manipulated image of a rabbit and some kind of other rodent…
In fact, this is a recurring impression for me – certain animals simply look so beautifully unreal like they were fictional characters from a weird dream or an animated movie. Of course, it’s just a feeling evoked by the amazing diversity and whimsiness of our planet’s wildlife, but in some cases this impression proves to be right with time :) : in 2018 Dreamworks released an animation short about a bilby meeting a chick in the dangerous outback of Australia.

I really hope Dreamwork’s short will gain the bilby a little exposure and support: obviously, the species actually exists (at least the greater bilby…) and it needs every help to keep it that way. So back to the facts:

Bilbies are rabbit-like marsupials also known by the name rabbit-eared bandicoot, endemic to the arid and semi-arid areas of central Australia. There are two bilby species: the greater bilby (Macrotis lagotis), slowly becoming endangered with around 9000 mature individuals living in natural populations and in captive colonies; and the lesser bilby (Macrotis leucura), already extinct.

The lesser bilby or yallara is relatively unknown to science: most of our knowledge is based on a 1931 description (On mammals from the Lake Eyre Basin) by H. H. Finlayson, who also collected 12 live specimens near Koonchera dune in north-eastern South Australia, where the species seemed to be abundant at that time. 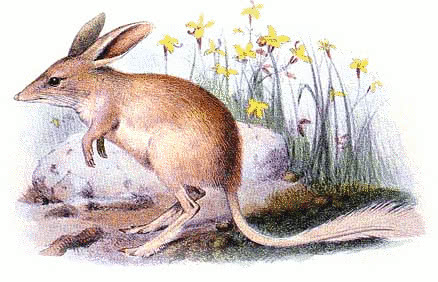 The lesser bilby went extinct during the 1950s

Date of extinction: The lesser bilby most probably went extinct during the 1950s, but the exact date is unknown. According to the accounts of aboriginal Australians, the species might have survived into the 1960s; but the last physical evidence collected was a less than 15 years old skull found below a wedge-tailed eagle’s nest in the Northern Territory in 1967. 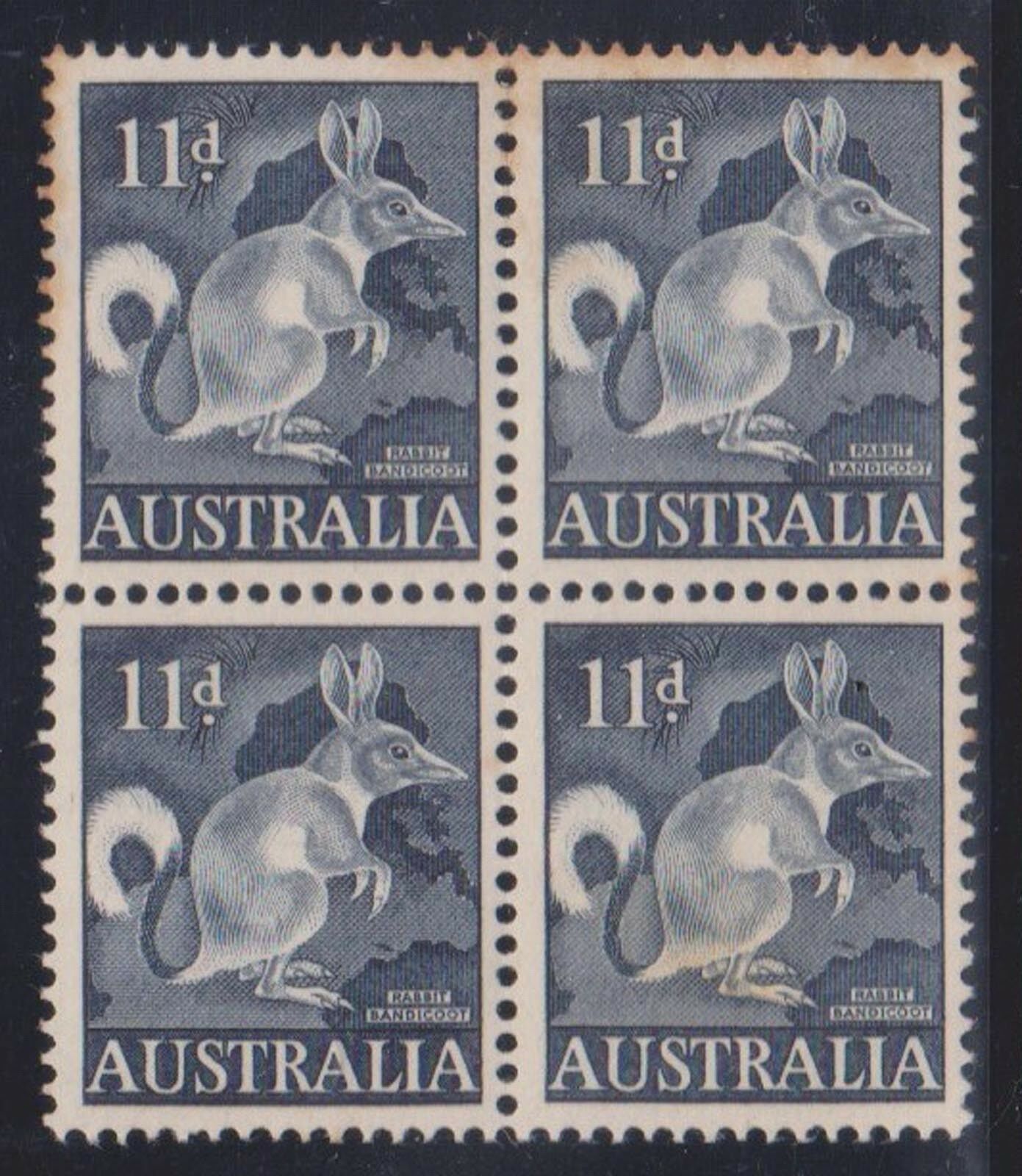 The bilby on Australian postage stamps from the late 1950s

Range: As the lesser bilby was first described in 1887, there’s very little known about the original range and distribution of the species – at the time of the discovery, lesser bilby populations might have been severely decreased by foreign predators introduced to mainland Australia by European settlers in the late 18th century. The known range of the species is confined to the Gibson and Great Sandy deserts and the northern half of the Lake Eyre Basin in central Australia.

Description: The appearance of the lesser bilby was very similar to its surviving relative regarding the general shape and proportions of the body, the head and the tail. Bilbies have characteristic, elongated bandicoot muzzle; long rabbit-like ears; and long, furry tails. They have strong forelimbs and claws used for burrowing and digging for food; and they move with a cantering gait with the hind legs moving together and the front legs alternatively, often carrying their tail like a banner.

The fur of the lesser bilby was colored pale yellowish-brown to grey-brown, with lighter fur on its belly, limbs and tail. The body mass of adults was about 300-450 grams, a lot smaller than the greater bilby’s.

Bilbies are strictly nocturnal animals; they spend the daytime sleeping in their 2-3 m deep burrows. The lesser bilby had the habit of temporarily closing the entrance with loose sand while in residence. Bilbies have very limited eyesight – they’re almost blind – but their ears and nose are very sensitive. They are omnivores, feeding on anything from ants, termites and other insects through roots and seeds to small rodents. 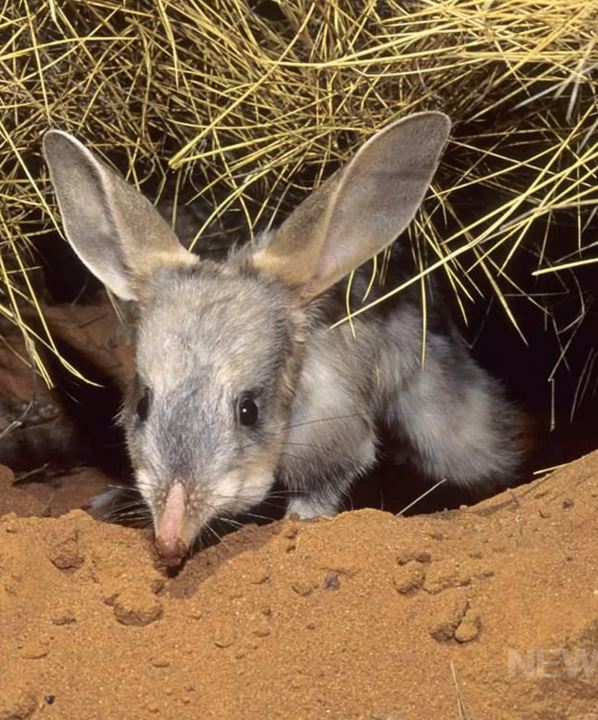 Characteristic features of the bilby: the elongated muzzle and the long, rabbit-like ears

Being marsupials, lesser bilby babies spent a longer period in their mother’s pouch after birth. The females usually had twins and the species probably bred non-seasonally.

Cause of extinction: Competition with rabbits and other animals, degradation and loss of habitat, being hunted for food by aboriginal people and changes in the fire regime are all possible factors that contributed to the extinction of the lesser bilby; but the main reason was that the bilby was defenseless against foreign predators like the foxes and feral cats that were introduced to their ecosystem by humans. The main threats for the still surviving greater bilby are very similar. The national conservation program to save the greater bilby includes monitoring and protecting the wild populations from competitive animals and predators, and captive breeding with reintroduction of small groups into conservation areas of its former habitat.

The lesser bilby poster at the top of this post is available in my store on Redbubble, with design variations more suitable for apparel and other products. My whole profit goes to the Sea Shepherd to support their fight to protect our oceans and marine wildlife.