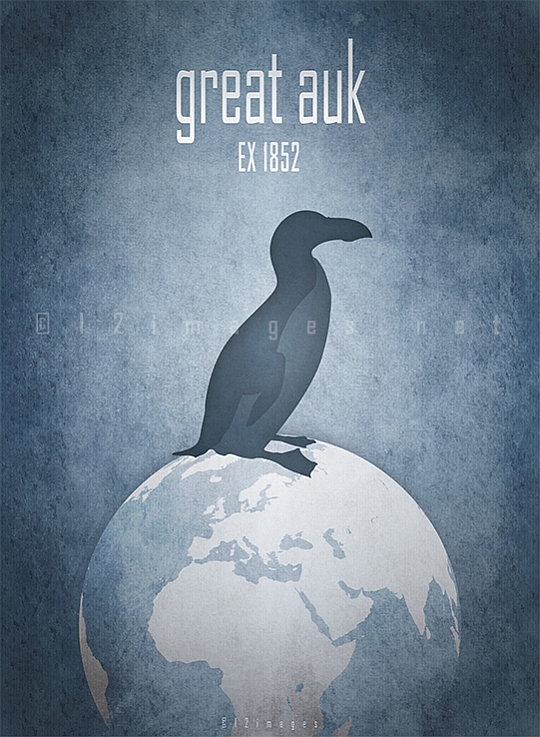 The great auk – the eponym of the penguins

Nowadays when we mention penguins everybody thinks of the flightless aquatic birds of the Antarctic proudly wearing their tuxedos. Few people now that the original penguin – the eponym of these popular birds – was the great auk (Pinguinus impennis): an already extinct species that once used to be fairly well-known by the people of Europe and North America. Actually, taxonomically the great auk and penguins are only distantly related; but when exploring the seas of the Southern Hemisphere European sailors named the newly discovered species due to their physical resemblance to the great auk. The two taxa are widely considered as an example of convergent evolution and ecological corollary.

Date of extinction:  The nesting colonies of the great auk had been nearly eliminated by humans by the 16th century along the European side of the Atlantic and by the end of the 18th century along the American coast. One last nesting colony remained on a remote, inaccessible islet near Iceland – in 1830, the Great Auk Rock was destroyed by a volcanic eruption. The birds moved to the nearby Eldey Rock, where the colony quickly diminished – the adult specimens and their eggs were collected for museums for preservation and display. The last pair incubating an egg was killed on 3 June 1844. The last confirmed sighting of a living great auk dates from 1852, from the shores of Newfoundland. 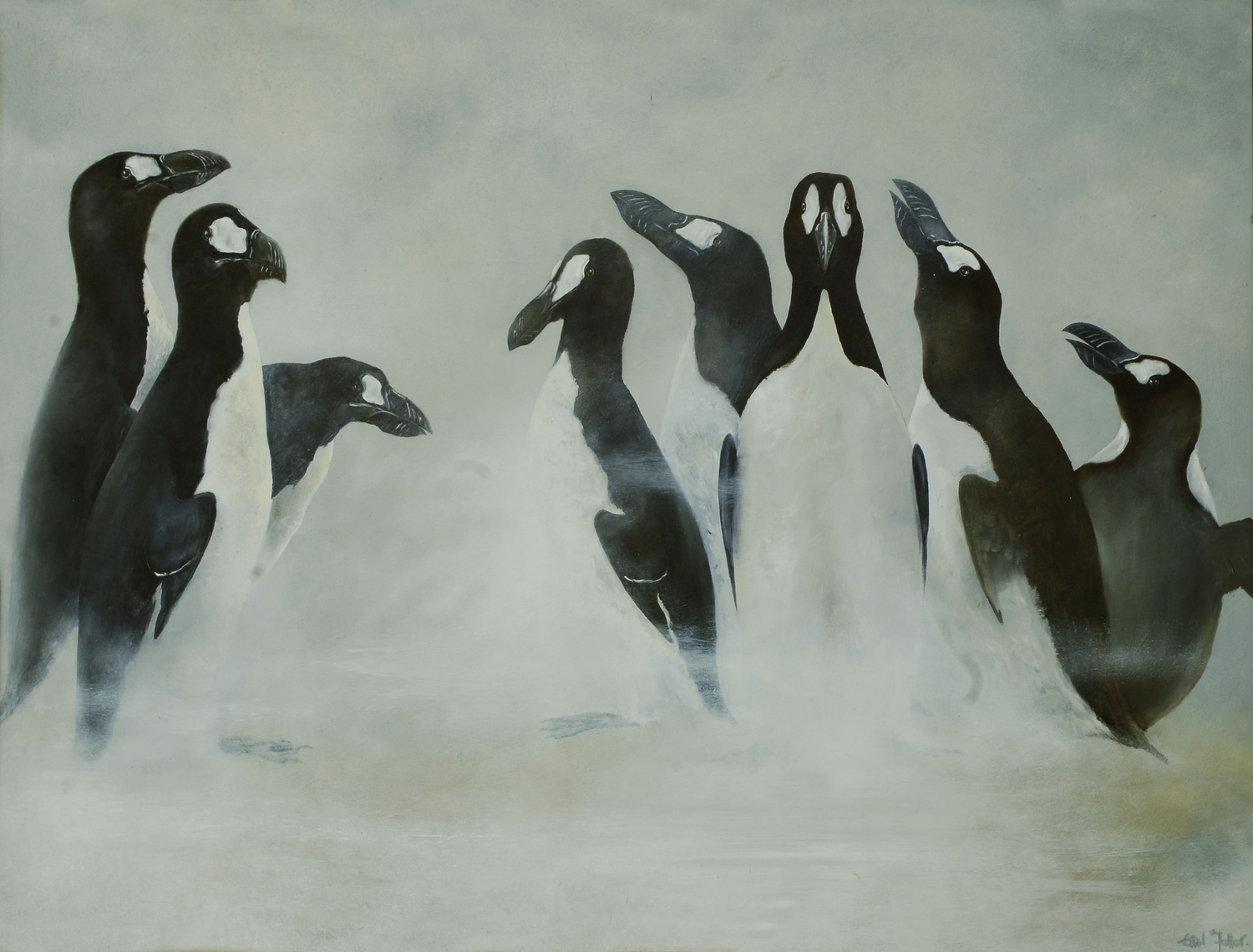 Range: Once great auks were fairly common in the coastal area on both sides of the North Atlantic, the estimated maximum population was in the millions. They inhabited mainly the colder coastal waters from Greenland and Norway to Canada and Great Britain, occasionally reaching even the warmer seas of the Iberian Peninsula and Florida.

Habitat: Great auks spent most of their lives in the sea, foraging on smaller fish – they only left the water for land when breeding. They nested in very dense colonies on remote rocky islands with rich feeding areas around them, where the sloping shorelines provided easy access to the sea. It is believed that the great auk never had more than 20 breeding colonies – some of the known localities were Funk Island near Newfundland, St. Kilda off Scotland, Geirfuglasker near Iceland, The Gulf of St. Lawrence and Eldey Island. 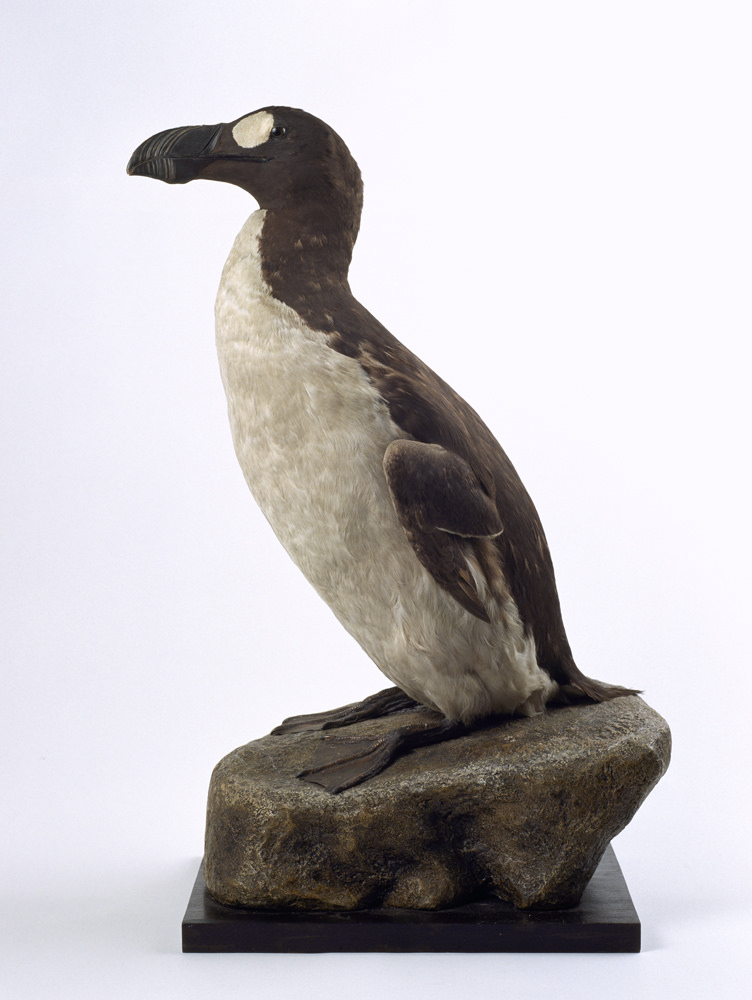 Description:  Great auks were large, flightless seabirds in the family Alcidae; standing about 75 to 85 cm tall and weighing up to 5 kg. In overall appearance they looked similar to their smaller living relatives, the razorbills. Male and female were similar in plumage, with probably a small difference in size. They appeared chubby due to a thick layer of fat necessary for keeping their bodies warm in the cold water. The adult birds had black plumage dorsally, with white breasts, bellies, and undertail-coverts, with some seasonal and ontogenic differences. Their wings had a white trailing edge and in breeding plumage there was a large white patch in front of each eye, which was replaced in the non-breeding period by a broad, white band and a grey row of feathers extending from the eye to the ear. Their bills were robust and ridged and curved downward at the top. The reduced wings were only about 15 cm in length and were used to propel themselves underwater during dives.

Between late May and early June female auks used to lay one egg each year. The egg had a characteristic, elongated shape with a marbling pattern of varying black, brown or grayish spots and lines on a yellowish base. The size of the egg averaged around 12-13 cm length and 7-8 cm across at the widest.

The characteristic egg of the great auk: an old photograph from 1844 from The Auk, the quarterly journal of the American Ornithologists’ Union on the left
and a colored lithograph by F. W. Frohawk from 1888 on the right ©Copyright Wellcome Collection / CC BY 4.0

Great auk chicks had grey down, the black neck of the juveniles was mottled white. They had white rings around the eyes but instead of the white patch of the adults they had a grey eye line extending to below the ears.

Great auks were excellent swimmers, able to evade capture by people in boats. They were able to dive to great depths (even around 100 meters) and could hold their breath for 15 minutes – that is longer than what a seal is capable of. When on land, they walked slowly and awkwardly with short steps.

Cause of extinction: The story of the extinction of the great auk is one of those stories about the endless stupidity, greed and selfishness of humanity that leave you with incomprehension and seething with anger. In comparison to other bird species that went extinct around the same time, the steps leading to the total disappearance of the great auk are quite well documented – especially the last, brutally cruel acts of the 19th century. If you are interested in the details I recommend you reading Errol Fuller’s excellent book: The Great Auk: The Extinction of the Original Penguin.

To summarize: after being intensively hunted by humans at least from the 8th century – mainly for food and fishing bait – this species was eliminated eventually to make pillows from its down, and to provide stuffed specimens and eggs as collectibles for rich Europeans and museums.

A few years ago, an international team of scientists began a discussion about the possibilities of reintroducing the great auk into its former natural habitat by recreating the species using DNA extracted form fossils or preserved organs (edited into the cells of the closest living relative, the razorbill) and implanting fertilized embryos into a bird big enough to be capable to lay a great auk egg. 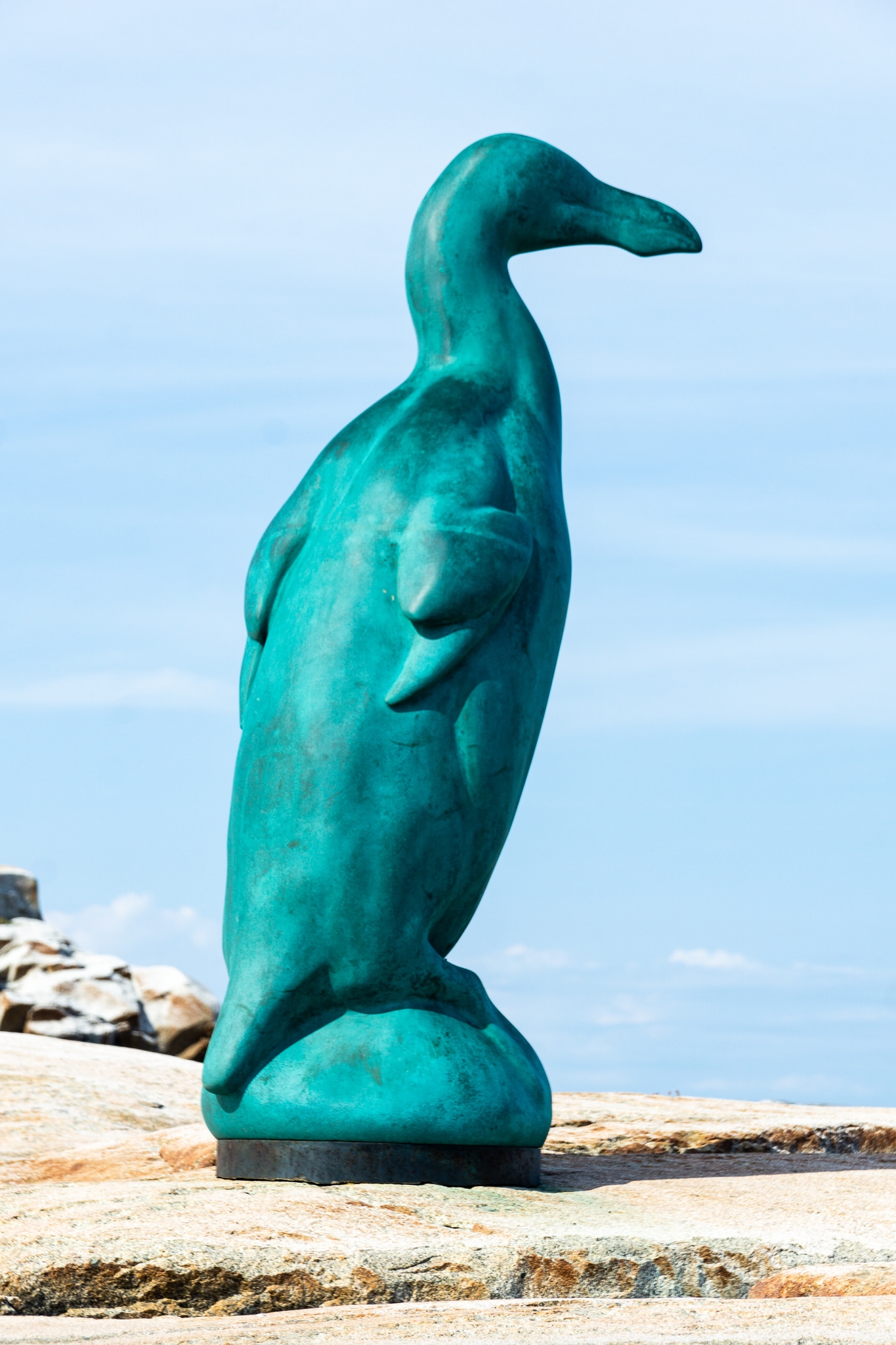 Life-sized great auk statue by artist Todd McGrain on the Reykjanes headland (Iceland), one of the last known locations of the bird
©Copyright Chuck Reback

The great auk poster at the top of this post is available in my store on Redbubble, with design variations more suitable for apparel and other products. My whole profit goes to the Sea Shepherd to support their fight to protect our oceans and marine wildlife.