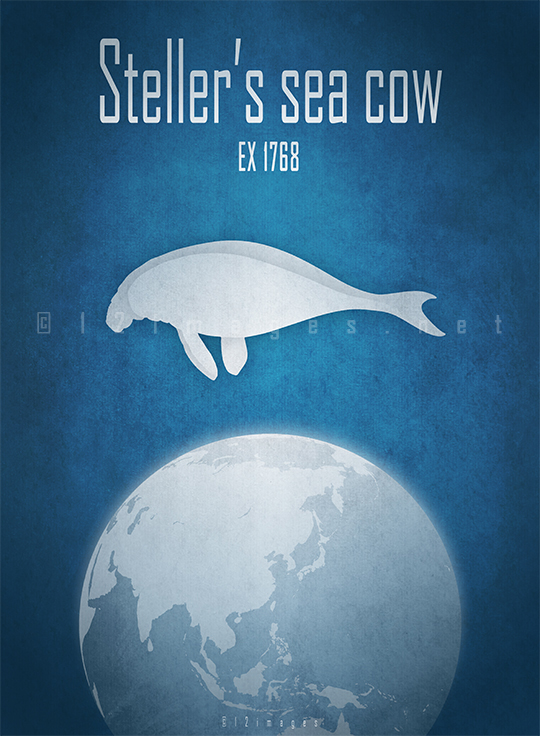 Steller’s sea cow – a surviving giant of the Pleistocene

The Steller’s sea cow was one of the last survivors of the megafauna of the Pleistocene to die out in our era. The giant marine mammal was discovered in 1741 by Georg Steller – naturalist of the expedition led by Danish explorer Vitus Bering on the commission of the Imperial Russian government to chart the route between Siberia and Kamchatka – when their ship wrecked on an uninhabited island on the way back to Russia. The sea cow population was confined to the waters surrounding two small islands – the newly discovered species was completely extirpated during the following decades by expeditions of the flourishing Pacific maritime fur trade. The demise of the sea cow was so rapid that in fact everything we know about its appearance and habits is based on the detailed accounts of Steller from his posthumous published work: De bestiis marinis – The Beasts of the Sea, and the few dozen skeletons that were found from the mid 1800s until today. 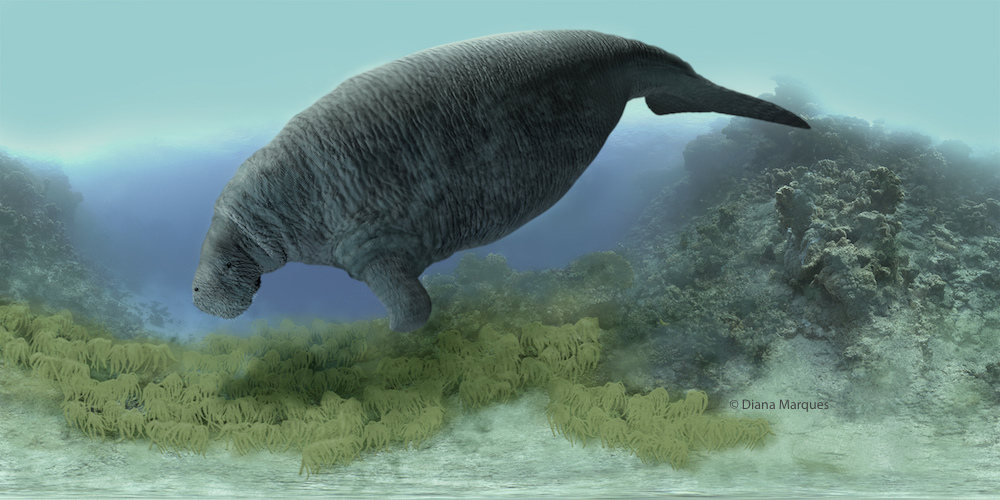 Model of the Steller’s sea cow based on descriptions and skeletons; a reconstruction made for the Skin & Bones project of the Smithsonian’s National Museum of Natural History by
©Copyright Diana Marques

Date of extinction: Johann Friedrich von Brandt, director of the Russian Academy of Sciences concluded based on reports from fur hunters following Vitus Bering’s route to Alaska that the Steller’s sea cow was extinct by 1768, only 27 years after it was discovered by the Bering expedition.
However, there were some reports of alleged sightings dating after the official extinction date, even from the mid 20th century.

Range: At the time of its discovery, the Steller’s sea cow had only one last population: in the surrounding waters of the Bering and Copper Islands, two members of the Commander Chain between the Aleutians and the Kamchatka Peninsula.
Later discovered evidence of bone fragments proves the existence of another population in the northern Bering Sea at St. Lawrence Island around the 9-10th centuries; and based on bone fragments and accounts of Aleut people it is probable that another population persisted into the late 18th century at the Near Islands (western Aleutian Islands).
Fossil finds from the Pleistocene show that before the Ice Age sea cows were probably ubiquitous along the edge of the Pacific from Japan to the Baja Peninsula. 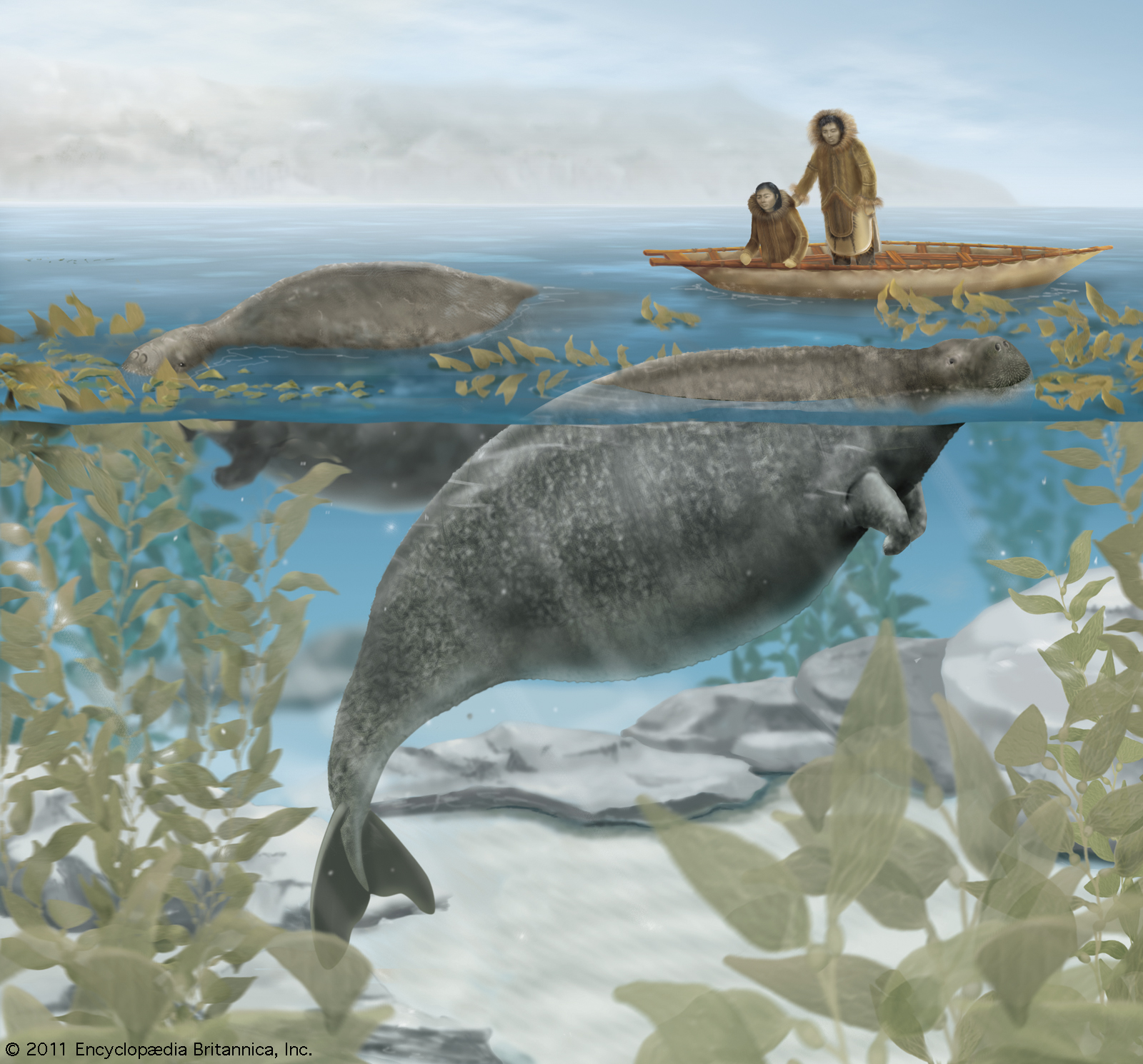 Habitat: The Steller’s sea cow used to inhabit the cold shallow waters along the shores.

Description: Steller’s sea cows (Hydrodamalis gigas) were large sirenians, members of the once-diverse family Dugongidae. Their closest living relatives are the dugong and three manatee species, but instead of the warm tropical seas they adapted to living in frigid Arctic waters. Their huge size – adults grew to be 8-9 m long, weighing up to 10 tons – their thick blubber and outer skin were effective adaptation methods to conserve the heat of their body in the icy sea and to prevent injury from the sharp rocks of the shallow waters. 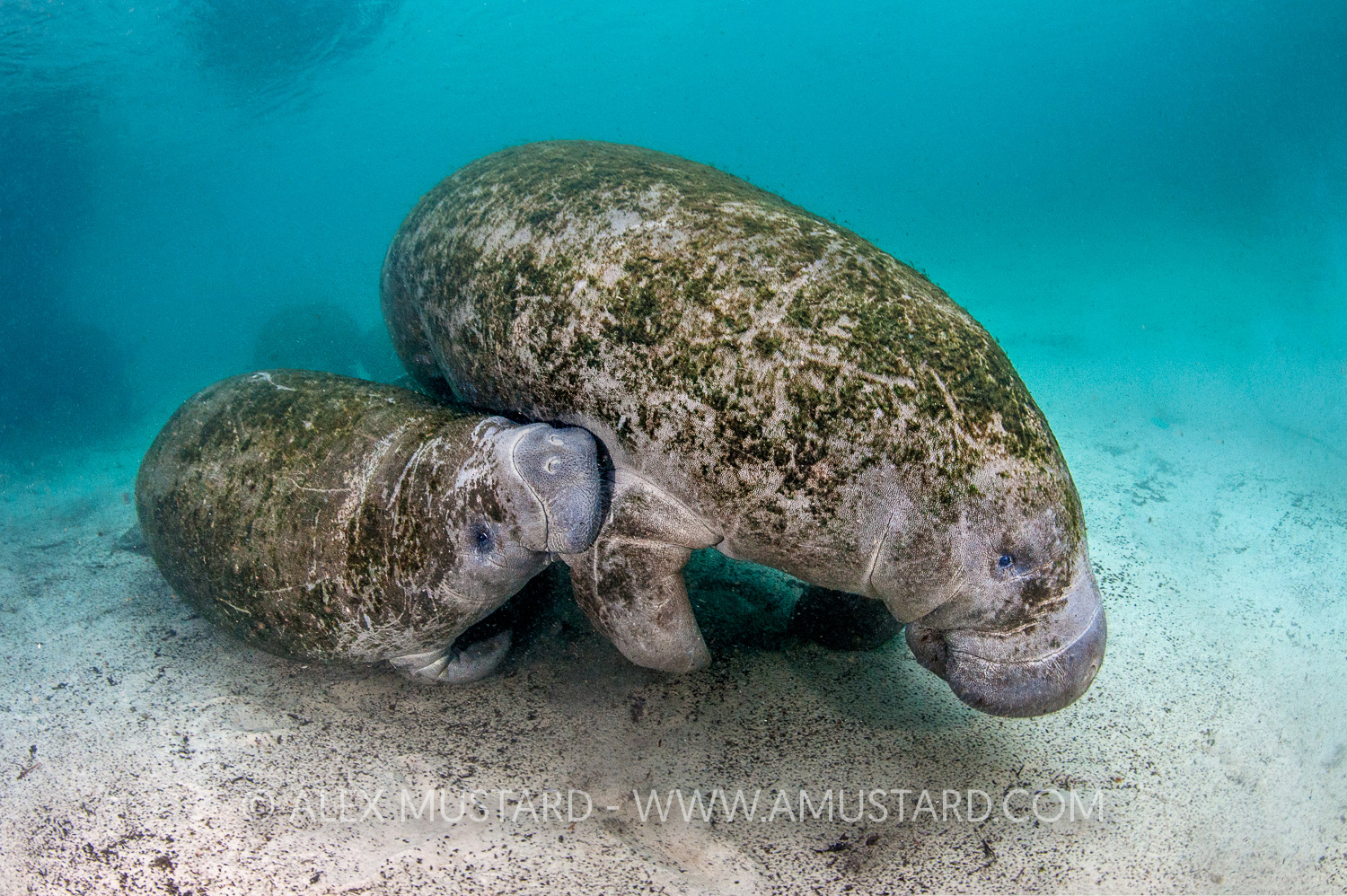 They were obligate algivores eating seaweed; but being unable to completely submerge, their food source was reduced to kelp and seagrass species inhabiting the coastal waters, with their canopy not deeper than 1 meter below the tide. They could hold their breath for a few minutes under water and the inside of their flippers was covered with bristles to anchor them down and prevent them from being swept away by strong waves. The flippers and the forked tail fluke were used for swimming and walking in shallow water.

The sea cow’s snout and mouth were perfectly adapted to grazing on kelp: the snout pointed downwards, with large and broad upper lips extending beyond the lower jaw. Instead of teeth they had white bristles on their upper lip, with some of them protruding from the muzzle; and two keratinous plates in their mouth, used for chewing. 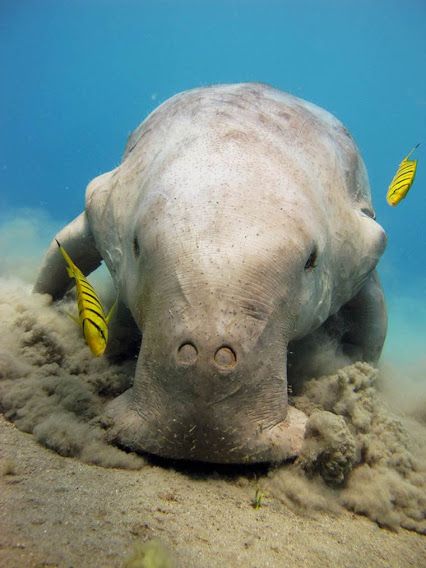 Portrait of a dugong, the closest living relative of the Steller’s sea cow
©Copyright Laura Dinraths

Sea cows were highly social animals, probably monogamous. They lived in small family groups, guarded and helped each other and protected their calves against predators. Females had one calf after a more than one year long pregnancy period.

Cause of extinction: The rapid demise of the Steller’s sea cow population of the Commander Islands was apparently the consequence of overhunting for their tasty meat and valuable subcutaneous fat by European and Russian sailors and fur traders. The populations of the Aleut and St. Lawrence Islands were wiped out by native people for the same reasons.

However, recent studies (James A. Estes) based on modern methods of mathematical simulations to model indirect community interactions prove that the extinction of the Steller’s sea cow at the Commander Islands would have been inevitable anyway as a consequence of the ongoing overkill of sea otters by Russian and Aleut hunters after the onset of the Pacific maritime fur trade in the 1740s. 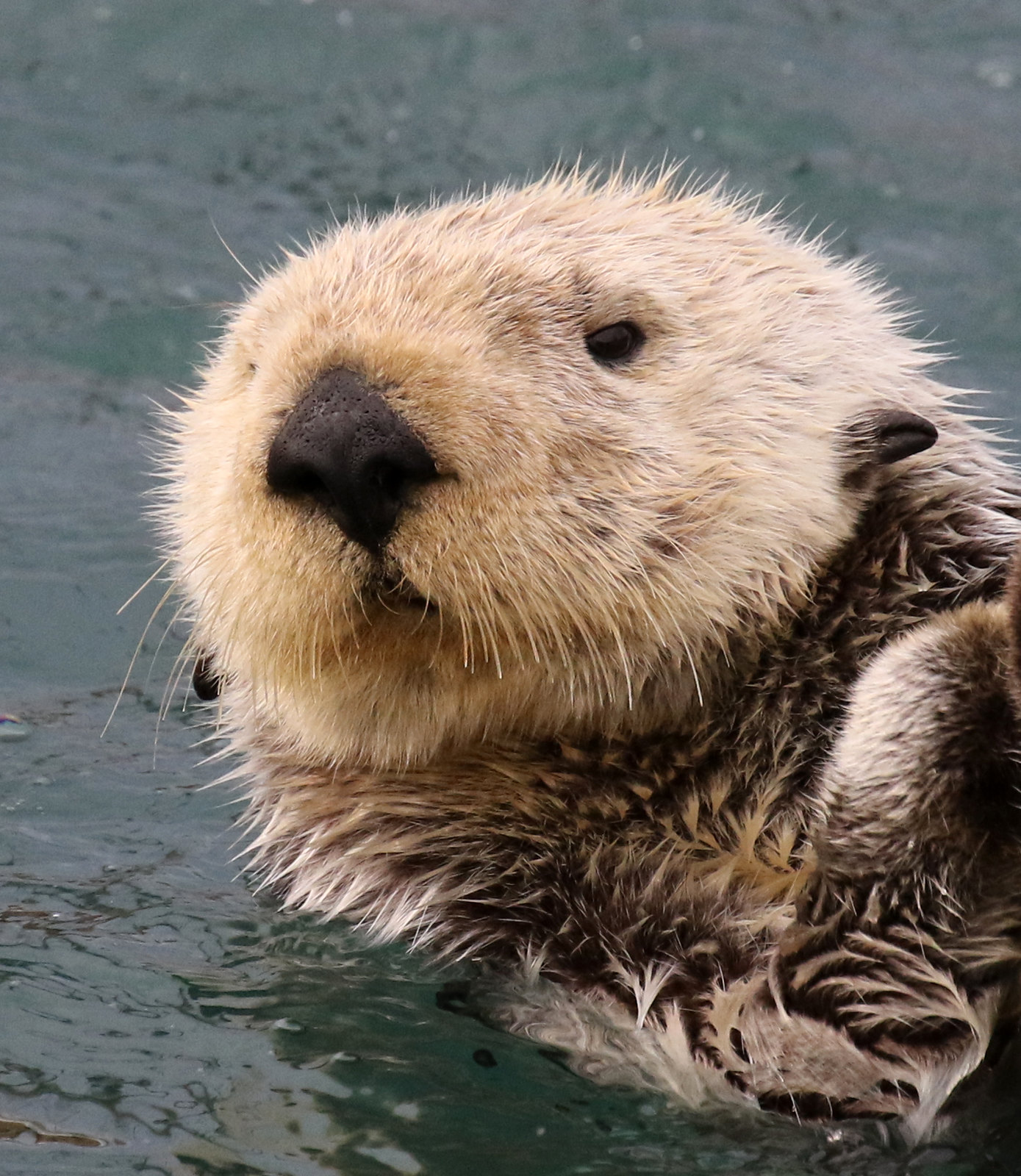 The sea otter is a keystone species in the trophic cascade of the kelp forest
©Copyright Robin Agarwal / CC BY-NC-NC 2.0

Several observations during the 20th century in different areas of the Northern Pacific showed evidence that sea otters are key species in the trophic cascades of the kelp forest: they maintain the ecological equilibrium by limiting the number of sea urchins, one of their main food sources. Sea urchins are herbivorous animals thriving in kelp forests: without sea otters their population increases rapidly, creating kelp-free dead zones and leaving other herbivores with nothing to eat. The elimination of sea otters from the Commander Islands ecosystem caused a chain reaction reshaping the whole habitat: with the decline of the kelp forest the environmental carrying capacity for sea cows drastically reduced – the species most probably would have starved to extinction in a few decades.

The example of the Steller’s sea cow has major significance as it supports the long debated hypothesis about the sudden extinction of the New World’s megafauna at the turn of the Pleistocene/Holocene eras that the directly caused extinction of a few keystone species responsible for maintaining the balance of their ecosystem may have resulted in the coextinction of other species. This theory explains the sudden disappearance of several other giant species: for example, the Haast’s Eagle vanished from New Zealand along with its prey, the giant moa, that went extinct about a hundred years after the Maori landed on New Zealand. 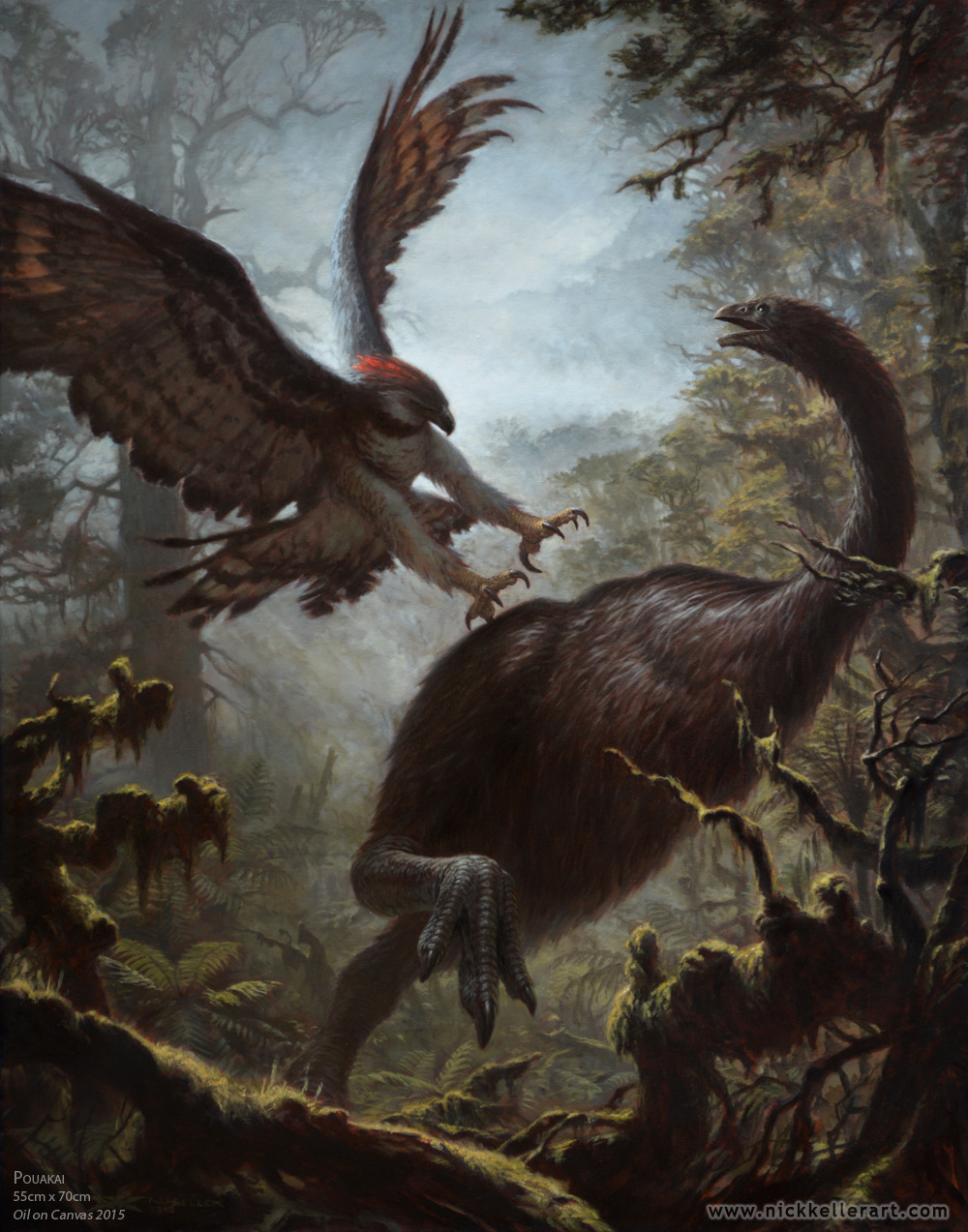 The Steller’s sea cow poster at the top of this post is available in my store on Redbubble, with design variations more suitable for apparel and other products. My whole profit goes to the Sea Shepherd to support their fight to protect our oceans and marine wildlife.