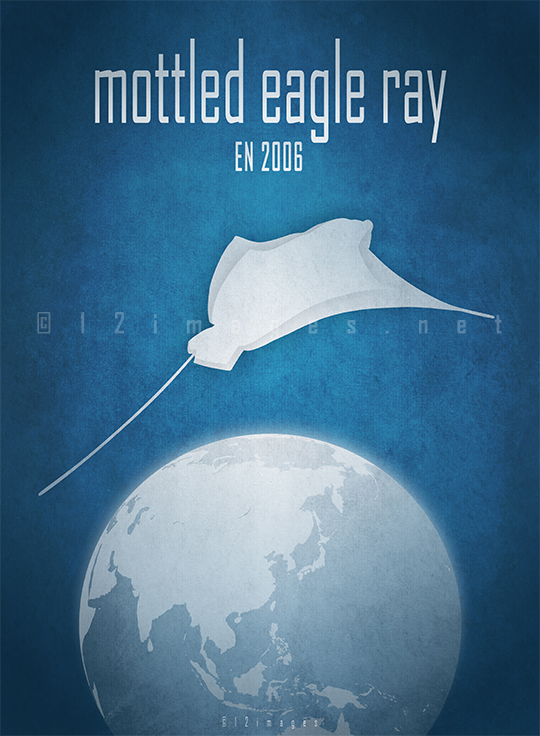 If you spend some time browsing in the IUCN database of species you get to realize two scary and disturbing things – I mean statistically, because the database for the most part is a disturbing and infuriating read on its own… There are over 15 000 species categorized as DD (data deficient), meaning we don’t have enough information about those plants and animals to be able to assess how threatened they are; and more than 50 percent of the critically endangered and endangered species also need research on basic knowledge like life history, ecology, population size or distribution. Among them the whole diversity of wildlife is represented; they live in various habitats from forests to deserts, in land and marine regions of all biogeographical areas. These species might be easily extirpated by humankind from the planet forever without even really knowing them before – not that I would think it makes a real difference for the victims, but anyway.

One of the marine species with very deficient information is the mottled eagle ray (Aetomylaeus maculatus), assessed as endangered. 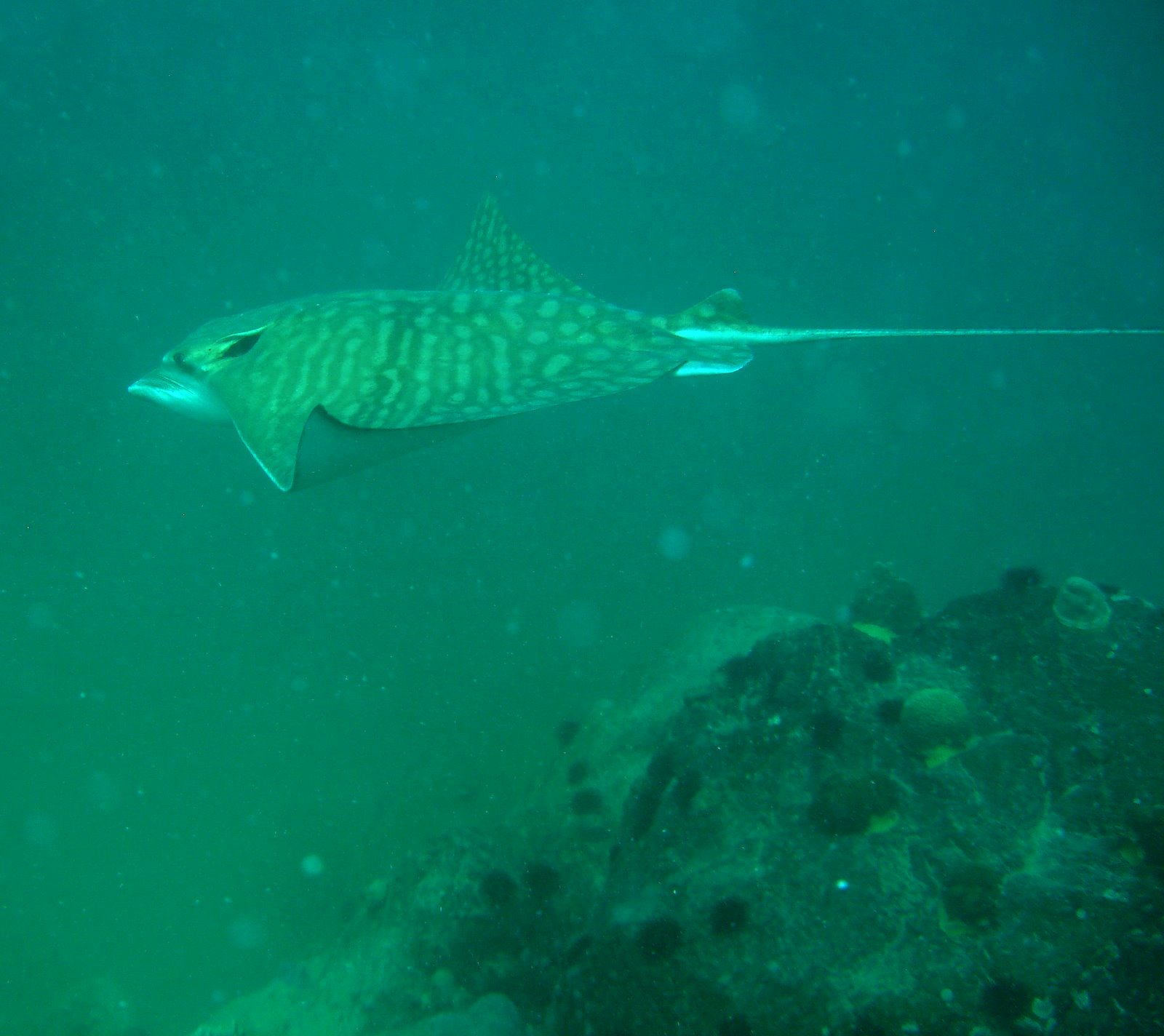 Range: Mottled eagle rays have sporadic distribution in the Indo-West Pacific along the coastal waters of the South China Sea and Indonesia, the Bay of Bengal, Sri Lanka and the Gulf of Oman. They no longer occur in the Gulf of Thailand.

Habitat: The species appears to be naturally uncommon, occurs on the inner continental shelf to depths of about 60 m over soft sandy substrate, also inhabits mangrove creeks and protected sandy channels to a depth of at least 18 m.

Description: The mottled eagle ray can grow up to 78 cm disc width, has an exceptionally long – over six times the length of the body – spineless tail and a distinctive color pattern of stripes and patches. It is an active swimmer, travelling long distances; feeds on crustaceans and mollusks. Mottled eagle rays are ovoviviparous (the embryos feed initially on yolk then receive additional nourishment from the mother by indirect absorption of uterine fluid enriched with mucus, fat or protein). The species is suspected to have a low fecundity, up to 4 offspring per litter.

Threats: The mottled eagle ray – as all marine animals in its habitat – is severely threatened by a variety of inshore demersal fishing methods (bottom trawls, gillnets, trammel nets) frequently used in its entire range. Fisheries tend to retain eagle rays as a ‘collateral catch’ and sell them to local fish markets. The high level of exploitation of these habitats combined with the low fecundity and natural rarity of the mottled eagle ray can lead to the extinction of the species very quickly.

And that’s it, we know nothing else about mottled eagle rays… 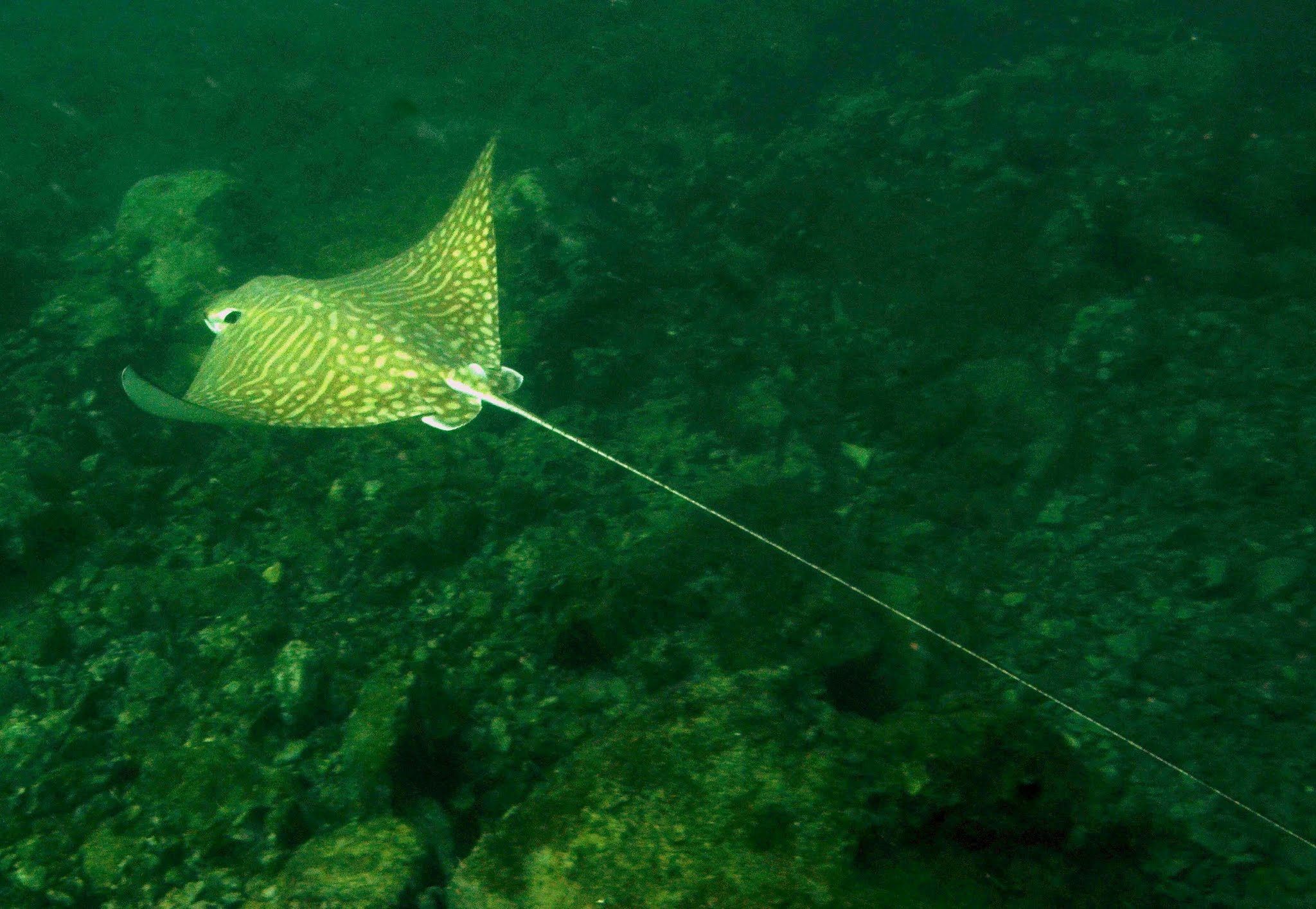 The mottled eagle ray poster at the top of this post is available in my store on Redbubble, with design variations more suitable for apparel and other products. My whole profit goes to the Sea Shepherd to support their fight to protect our oceans and marine wildlife.